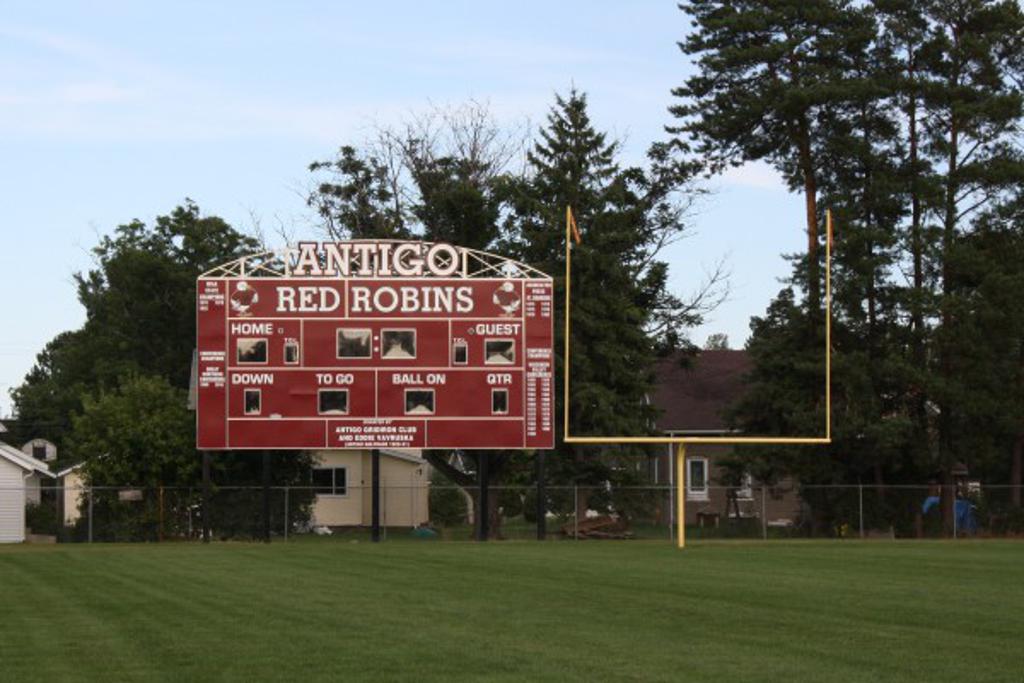 The Antigo Gridiron Club has begun fundraising efforts to update the playing surface at the long-time home of the Red Robins football team, venerable Schofield Stadium, as well as replacing the visitor's side bleachers.

The major and much-needed project has been on the discussion table for a number of years and plans are in place to soon bring it to fruition.

With a total price tag of approximately $300,000, the Club has already garnered about 25 percent of the cost, but to get the rest of the way, help from a community long-known for its support of the football program and youth sports-in-general is needed.

The club plans to have the field itself excavated and replaced, along with landscaping, site storm and sewer work, as well as irrigation. The goal is to involve all local contractors in the bidding process and work if possible.

“We're hoping that all the work can be done locally,” club member Chad Matuszewski said. “And we're hoping multiple contractors can work the project together, not just one getting it all.”

The field has been in rough shape for some time, and will need to be crowned, which will help with drainage and provide a better playing surface.

Related work includes the installation of a system to move the drainage water into the storm sewer utility, while the goal posts will also need to be realigned slightly.

The playing surface currently has an approximate three-four-feet difference in elevation from the southwest corner to the northeast corner, certainly not ideal for a playing surface. The upcoming work will fix the issue.

“There's a lot that needs to be done with the field,” Gridiron Club president Dave Schroepfer said. “We looked back and not a lot has been done over the years outside of rolling it and adding soil.”

Also included will the replacement of another sore spot for some time, the visitor's bleachers. While they have valiantly withstood the test-of-time, the wooden structure is on its last legs and needs to be brought up-to-code.

The bleachers will be dismantled and replaced by a much more-durable 200 foot aluminum structure. Safer, with much less maintenance needed in the coming years.

Hopes are to begin work in the spring, with an early completion date in time to take the field in the fall. That optimism leaves a relatively short window to make it all happen.

“We do want a couple months of growing to get the grass in the condition it needs to be,” Matuszewski said. “With that we need to get rolling from a funding standpoint and getting contractors on board, if it doesn't happen in that timeline, we would have to wait until the fall after the season is done.”

The Gridiron Club has asked for and received some donations from its membership and other funds from local foundations.

Different levels of donations are now available, beginning with a “fan” amount, which includes any donation up to $500, with levels all the way rising to the naming rights threshold of $50,000. While Schofield Stadium will remain in the official name, a business, family or individual garnering naming rights to the field will see a title such as “Smith Field at Schofield Stadium.”

A further plaque will be erected at the facility listing the donors.

Going forward, tax-deductible donations can be made by contacting Schroepfer at 715-367-0886 or Matuszewski at 715-219-5525. Contacts can also be made via e-mail, dschroepfer@altagenetics.com.

Any funds received in excess of the club's goal, will go directly to more future improvements to the football facility.

If all goes well, the Red Robins will have a beautiful new turf in time for the 2020 season opener, while the community can be proud they have helped do their part to keep the tradition rich Antigo football program alive for years to come.